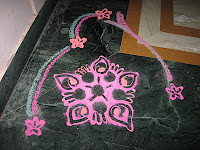 Have used techniques seen in rangoli videos...rangoli on doorstep.
Posted by vasrao@gmail.com at 6:44:00 PM 7 comments 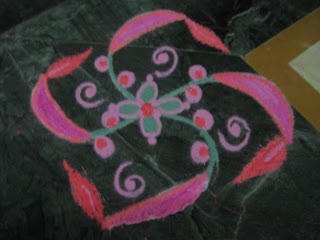 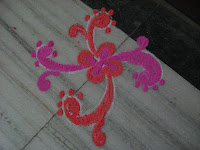 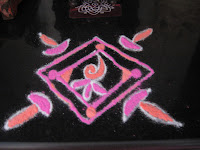 My hair was  long, when I was a  little girl.I used to detest its length in those times.This is so, as I recall, that once, I caught hold of a pair of scissors & cut some flicks ! Of course ,all at  home were angry .It still made a fashion statement & that's how flicks became a rage ! My mom used to oil my hair once a week & give me a head bath with shikakai.

As I grew older ,my hair grew longer  & my dadi forbade me to cut it.The moment ,I joined college ,I cut my hair up to shoulder length, so that, I could tie a pony & manage my hair.I had very cleverly avoided to learn making  plaits .This was the excuse, I gave when my parents asked me, the reason of getting a hair  cut.After that, there was no stopping back.I still oiled my hair regularly & the shampoo  replaced shikakai.The shampoo would give a bounce & smoothness to my hair which I loved ! As I oiled my hair ,it made my hair shine & also greasy .I had no options then  & life went on.

Later ,I started working after finishing college.I cut my hair even shorter.I felt emancipated.I now started taking more care.I would shampoo my hair twice a week & sometimes even three times if the weather was very humid.I tried out many shampoos.For some months ,I tried out a branded herbal shampoo which was highly priced.It did wonders to my hair .All in my office noticed it & complimented me ! I was elated ! Then ,I switched to another brand many months later  as I was bored.I wanted to try out other brands.

Slowly & surely ,I started applying henna to my hair.I would buy from the market & even from my beauty parlor.Sometimes ,I would go & get it applied there.At other times,I would apply it myself.I loved the tint henna gave to my brown hair.Also it conditioned my hair so well ! Initially ,I applied henna once in six months.Later ,the gap reduced & it became once in two to three months.After marriage ,as my worries increased manifold ( as is the case with all females who enter matrimony ) I started applying henna regularly once a month ! My hair needed henna, as it was turning grey ! Nowadays ,I have a beautician, coming home regularly once in a month to apply it.She has opted for abranded herbal henna brand though it is more expensive.This is so, as there are fewer chances of adulteration in premium brands.

I love henna on my hair as my hair is brown & reddish brown henna colour nicely covers up my white hair.I  have avoided chemical treatments of my hair like using dyes.I have never gone in for straightening or perms.I feel it is foolish, to soil my hair by paying such a fancy price ! It is like a double jeopardy !

My hair is responding well to my love & care.I regularly go for hair cuts & hence my hair has no split ends.I very lovingly massage it twice a week with oil & then shampoo it with a herbal shampoo.Whenever,I apply henna to my hair,I keep it on for three to four hours.Then, I wash it  with plain water.The next day ,I apply oil nicely all over my hair & keep on the oil for an hour, before I shampoo.This is to maintain henna colour on my hair.This technique has given my hair, a very lovely look.I just adore my hair ! It has a bounce & a shine with that henna tint ! It sets beautifully & as the days progress ,that setting goes away.I have been advised to use serum .Though I was quite skeptical of using serum & even a conditioner as I felt, it would make my hair sticky ,I am better informed now.

I recently went in a spa & was informed about conditioning of hair & application of serums & masks to protect hair.That day, as my hair was blow dried after a hair cut ,the beautician applied a serum & my hair has stayed set for three days ! That's wonderful ! I have to just brush my hair & I am ready to step out.My hair looks  superb : as if, I just stepped after a hair styling ! I am a convert to conditioners & serums now ! Even, I can look my best with minimum efforts !

Though I sport short hair ,my hair compliments me & adds oodles to my personality ! I have been gentle & loving to my hair & it shows ! My hair is now ,very soft & manageable.It has a lovely colour  & suits my wheatish complexion.As I smile, at my lovely mane ,it  reciprocates by shining !
Please "Like" this blog post on Facebook,share it on facebook ,twitter & and or comment on it .It can also be rated & or labelled as cool,funny or interesting.
This blog post is my entry for the contest organised by Dove & IndiBlogger titled :
Love is a two way street:Love your hair and it loves you back ! 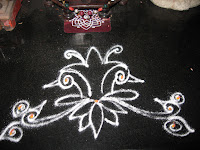 I had to write this post - my friend told me that my acidity is due to stress .She also revealed that my padosan is the cause of all my stress !

My padosan will come & ask for my landline phone.Once handed ,she will fumble with it .She has to be told to press the "Talk" button & so on.Still,nothing works,& I am forced to transform into a telephone operator & dial the number & hand it over to her ! And mind you ,this is not the first time ! I have lost count of the numbers now ! Good -otherwise ,I would be expected to dial from memory !

When we were to go on our trip abroad,she was happy.There was a reason behind it.They had booked tickets for a tour which included Thailand.There was a civil unrest there.Hence, they cancelled their visit.The tour operators said that they will postpone it.Since we were travelling to that side of the world where Thailand is located,my neighbour was happy that we will be travelling & returning before they embark on their trip ! This in spite of the fact, that our tour package never included Thailand ! I used to be under the impression that only the lady of the house was eccentric & soon realised I was wrong ! Her hubby  asked us, if all was safe during our tour as Japan had recently witnessed Tsunami & there had been civil unrest in Thailand ! We never visited Japan & neither their package tour included Japan ! After all this fius,they shopped like mad & got diamonds,shoes ,tees etc from their trip !


Last week, she rang my bell at eight in the night to borrow elaichi sorry  to get elaichi.It is not borrowing as she never had an  intention to return it ! She told me that as it was pitru paksh,all elaichis had been used up & her son ( who is an adult & employed ) wanted a sweet at that time ! I just gave in.I don't want people lying through their teeth .After all ,because she needed elaichis from me ,she lied.Sab paap mere sar par aa jayeega !

My padosi family is all of a kind - the borrowing variety.I had gone to the local pharmaccy store.My padosan's daughter in law  who stays with her in laws was also at the shop.I brought some medicines at the shop & paid.My neighbour's  bahu brought some shampoo ,cream,face wash etc.Then she enquired if the pharmacy store accepted credit cards.When that was refused ,she said that she will pay later & walked off ! I understood this as sangat ka asar- when a person stays in the  company of another, even for some time, ,some habits,do creep in our subconscious mind .They , then manifest themselves into the conscious world ! This borrowing was handed over to her, by her saas.Her saas is  notorious in our society for having  borrowed money & things from almost all the residents !

Recently ,I made an egg less  banana cake.I distributed to all my neighbours.My padosan came & praised my cake.I fell for it & told her the ingredients & that, I made it in the microwave.She  asked me the vessel in which I had made it.I showed the  branded glass ware which I had used.She hinted, that she might borrow it . When I mentioned this to a friend ,she quipped that even if the glassware breaks ,what are a few glass pieces, if peace can be brought with the padosan ? ! My neighbour is a non -vegetarian.She wanted to pass on the cake to her daughter's sasur ( father in law ) who is recovering at a clinic after surgey as he is a
vegetarian !

Next day ,my neighbour declared, that, she had brought all the ingredients for the banana cake & she wanted me to make it in my microwave & hand it over to her ! I informed her, that I had attempted it for the first time & by fluke ,it had come out well .She replied, that even if it gets spoilt,she will not mind.I tried to wriggle out of the situation by telling that bananns need to be over ripe for the recipe.Next day ,she said that she has pureed the banannas & she wanted to give it to me for baking the cake.I told her that  the microwave has konked out .She told me that all her purreed banans were getting wasted.I told her to make sooji ka halwa ( rava kesri )& add pureed bananas to it ! That would  be more yummy than the cake & does not need the microwave !

Now all my baking has to stop -lest my padosan learns, that the microwave is fit enough to make  the banana cake !
Posted by vasrao@gmail.com at 12:55:00 PM 5 comments