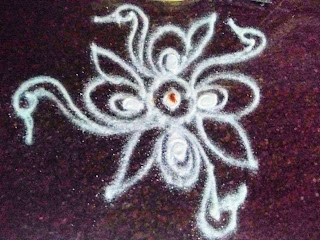 Book Review : Awaken the Durga Within.

Women feel oppressed & suppressed . They are used as doormats & walked over by others .How to overcome so many odds stacked against them ?

Usha Narayanan provides some rare insights to overcome the odds & march on. Her latest offering , Awaken the Durga Within,From Glum to Glam Caged to Carefree  deals with the power inherent in women .Only that this power needs to be rekindled. And Usha Narayanan shows the way or rather ways !

The publisher is Rupa Publications, Delhi.This book has been published in 2018.Its priced at 195 /- only . It has 152 pages. This book is available as an e book as well.

The book has a lovely red front cover which depicts a woman wearing a golden crown with a halo around her head. She is dressed in jeans, a white tee shirt & a red checked shirt as a jacket over her tee shirt. Her hair is free & falls over her shoulders. She wears a bindi .She has ten pairs of hands to depict that she multitasks .She is folding her two hands in namaskara pose. The remaining hands are holding a remote, a cell phone, a laptop, a book, a writing pad, a pen, some ropes or strings & piece of cloth each. The items she is holding are in light blue colour. Her complexion is wheatish in colour . She is wearing white shoes & standing with one leg folded at the knee. This is to convey that she is walking a tightrope. The cover itself, is a tell tale sign of the problems faced by women.

The back cover is red & gives a summary of the book .Usha has written this book as a guide so that women can get whats' due to them.The back cover towards the bottom gives a facial illustration of  Durga with prominent eyes & bindi .The illustration is faint as it almost merges with the background.

The book's printing is good .The book introduces the readers to Usha as an author who has written four books on Indian mythology , a thriller & two books on romance.All her books have been successful. Usha had a rewarding career in advertising& media in the corporate world before she became a successful author. She is a gold medalist with a master's degree in Englsih Literature. 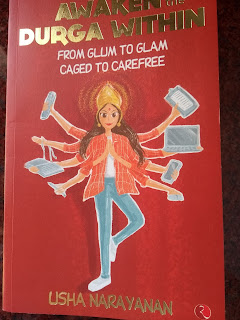 Usha has dedicated the book to her mother who helped her to break free.The book begins with Introduction as the first chapter & ends with Conclusion as the eighth chapter. Introduction states the misgivings a majority of the women have regarding themselves.And the chapter concludes with a story from the Indian mythology about a Goddess. As one reads , the story, the reader is mesmerised by the revealations that the Goddesses are the source of strength .And we as Indian women should take inspiration from them as the Goddess resides in each one of us !

In the next chapters, Usha talks about the three C's ...choice, change & create. She opines that women have to choose , change & create a better world for themselves. She says that women must be assertive not aggressive to get their points across. The change may be stressful initially .And yet after assertiveness is repeated , it becomes second nature & changes & transform us. And as the women are transformed, they create a better world for all !

The uniqueness about this book is that each chapter narrates a story of a female character from the Indian mythology .Some characters are known to us. Some are unfamiliar & yet all are strong female characters who were assertive & stood their ground. They were able to change the tide which were unfathomable even for Gods & the Trinity ! Usha narrates lesser known tales which are  revelations & how ! They unveil traits of the personalities of Goddesses which were never made public ! And Usha connects the mythological tales to the modern day Indian women.

And the suggestions are practical & simple. The author prods us on gently & states that women can take one step at a time. And these steps will add up to giant strides .And these strides will lead to scintillating  metamorphosis !!!!

The author says that Indian Goddesses have shown us the paths on which the Indian women need to embark to affirm themselves .And when women do that , they make this world a much better place .Because as the author rightly opines, a happy person ( more so a happy woman ) reflects her inner happiness on to the world converting the globe into  paradise !

A must read for girls as also women. Men can read it too & get insights into how they can assist their women & change for the better ! The title of the book " Awaken the Durga Within" is embossed in Gold on the cover of the book.  Likewise, the book is worth its weight in gold !
Posted by vasrao@gmail.com at 7:23:00 PM 2 comments