"The Bankster" is the latest book by Ravi Subramanian ,the winner of the 2008 Golden Quill Readers' Choice Award.The publisher of the book is Rupa ,New Delhi.It costs Rs 250 /- only & has 358 pages.The cover of the book shows a man dressed in an overcoat & trousers in  dark glasses, carrying a gun in one hand & a briefcase in another against the city skyline .He is standing near the sea at night time & a flight is leaving the city.This in short ,depicts the story. 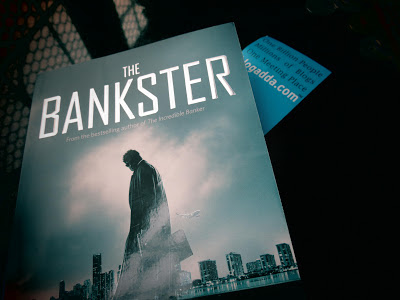 This is a thriller,  based on financial frauds going on in a bank .It also connects internationally with blood diamonds & arms procurement.It describes the NGOs which are funded  & hence, have their own hidden agendas.The story also deals with protests at a nuclear power plant which has echoes in the agitations at the  Koondakulam nuclear power plant.

The writer  has spun an intricate web of threads which run across  the world .His writing is effortless & includes lots of research regarding the war in Angola & the illegal arms trade.He strives to inform the readers that banks manipulate customers to suit their own ends.His writing is interspersed with humour & sarcasm.

The author is quite critical  of the banking sector as can be seen from the dialogues spoken by the characters he has created.This is a tale of a scam  which has connections in the bank ,the arms deals ,the NGOs & the blood diamonds.The bank employees manipulate the clients .Some scamsters use the banks for their own ends very smoothly .That  is till, someone smells a rat & starts probing.This leads to a  body pile up.The investigation gathers speed & ultimately the thugs are exposed.

The NGOs are not what they seem to be.They are funded by nations & others who have their own aims to bring to fruition.They will pull all stops, including leading protesters to death, as in poor nations, there are many who can be indoctrinated to death for a lakh or two.

The characters are very vividly described.In fact ,we have encountered  such characters in our dealings with the banks,the NGOs & the like.Hence ,it makes for a compelling read.The suspense builds up from the beginning till it ends in a spellbinding climax. Moreover ,now that scams are a way of life in our nation ,this story throws some light on how some will use  institutions & people  to achieve their dreams  destroying   them in the process.So ,this warns readers to beware of such crafty people.

I would recommend this book to all, for a peek into the financial scams that are springing  up on a daily basis even as India goes liberal & opens up.India needs to have laws & rules to  prevent & arrest financial frauds -otherwise, the public, will find it increasingly difficult to trust the financial institutions.

This review is a part of the Book Reviews Program at BlogAdda.com. Participate now to get free books!